Cathy Wurzer is one of Minnesota’s premiere journalists. She’s the long time host of “Morning Edition” on Minnesota Public Radio which means very little sleep and lots of caffeine.
She’s also comfortable in front of a TV camera and is the co-host of the longest running public affairs show of its kind in the country: “Almanac” on Twin Cities Public Television.

Cathy hasn’t spent her whole career in public broadcasting. She has had her feet firmly planted on both sides of the fence: public and commercial radio and TV. Cathy loves history and the idea for “Tales of the Road-Highway 61” came from an old 1934 WPA Road Guide to Minnesota that she found in an antique store. The first tour recommended for those early motorists? US Highway 61. Since Cathy’s mind works in mysterious ways, she wondered what it would be like to take that old book and travel the highway (Use  today seeing what sites are still there, which are gone and what has morphed into something else. It started as a documentary, then grew into a book about the highway for the Minnesota Historical Society Press. 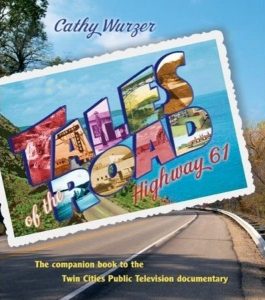 What happened next still tickles Cathy. Published in 2008, the book became a regional best seller, and the film, first aired in 2009, won two Emmy Awards and a national Golden Eagle CINE award.

There are fascinating stories along almost every mile of Highway 61 and they deserve to be told so Cathy’s packing the 1946 Cadillac and heading back on the road for a sequel. Cathy’s found stories that range from the history of what’s been called “The north wood’s answer to the Sistine Chapel” to the mystery surrounding a gangster, found dead along the highway in the 1930’s, but whose Red Wing. MN grave has fresh flowers on it even today.

Who doesn’t like a road trip? If you can’t take one on your own, join Cathy Wurzer and that cool, old ’46 Cadillac as they head down US Highway 61.